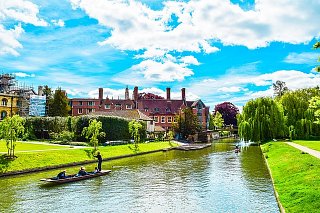 You don’t need us to tell you that London is one of the most popular tourist destinations in the world. The city attracts around 20 million tourists from around the world every single year.

Whether you’re visiting from neighbouring countries in Europe or further afield destinations such as the United States and Australia, travellers come from far and wide to immerse themselves in the abundance of attractions and culture in the English capital. In addition to those who come from abroad, roughly 26 million overnight visits are made to London each year by Brits!

Whilst there’s plenty to keep you occupied within London, it’s still nice to get out of the capital and explore some of the great treasures outside of London’s hub. Plus, this way you get full use out of your car hire.

For your next trip to the capital, here are some day trips for you to consider in your car hire:

Warner Bros has produced plenty of famous films over the years, but the Warner Bros Studio in Leavesden is devoted solely to the making of the Harry Potter films. The film franchise is world renowned and once completed, Warner Bros decided to use the artefacts and sets to create a permanent exhibition.

Filled with iconic costumes, memorable props and historic sets used in the films, nearly 6,000 Harry Potter fans from all over the world visit the studio each day! Just 20 miles north of central London, if you or your kids are Harry Potter fanatics, this is a must visit during your trip.

If you enjoy beautiful architecture, Roman history, and quaint Olde England buildings, then St. Albans is a great option nearby London.

In St Albans there is a Cathedral, Roman theatre, a Clock Tower that is the only remaining medieval town belfry in England and a market every Wednesday and Friday that dates back to the 9th century.

If that isn’t enough, St Albans has more pubs square mile than anywhere else in the country!

If you like the look of St Albans, we recommend you make the short trip to Hatfield House whilst in the area. Just an eight-mile drive from St Albans, the Jacobean house we can’t recommend the trip enough.

Since The Favourite hit the big screens in 2018 and saw huge success at the Oscars, just like Olivia Colman, Hatfield House, the setting for the film, has been on everyone’s lips.

Built in 1611, the house is filled with elaborate staircases, grand rooms and countless paintings. It is also surrounded by over 42 acres of beautiful gardens that can be explored.

Cambridge itself attracts hundreds of thousands of tourists every year and is frequently in the top 10 tourist destinations in the UK. So why not tick of both London and Cambridge in your trip?

Most famous for being a historic university city, Cambridge is home to majestic buildings, olde worlde streets and an abundance of museums and art galleries.

One thing you must do whilst in the city (especially on a sunny day) is to go punting. Similar to gondolas in Venice, the longboats, propelled by a pole take you on a relaxing trip around the university buildings – bliss!

If you’ve come to London from abroad, Green Motion service all of the airports in the vicinity of London. This means that you’re able to jump in a car and start your tasks as soon as you get off the plane. There is a Green Motion branch at London City Airport, London Luton, London Heathrow, London Stansted and London Gatwick, so we’ll always be able to get you on your way.

See what vehicles are available at your nearest branch here.