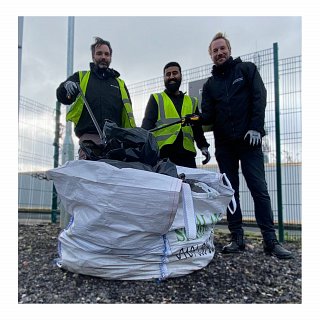 To introduce the new rental office located just a couple of miles from the Piccadilly train station, Ben and his team took to the streets of Manchester to clean up and recycle the cities rubbish. As well as making an immediate impact on the aesthetics of the area around the rental station, the team were also able to share their message of a greener future with Manchester locals in a bid to make them reconsider their usual car hire selections, in favour of a more innovative and caring company, Green Motion.

Green Motion Manchester are a motivated team determined to impact the way their local community think about travel as well as encouraging out of town visitors and business travellers to opt for their carbon neutral alternative to the common car hire. Their new rental station is ideally situated for those travelling into the busy city of Manchester for work due to their central location, amazing transport links and hundreds of business and conference centres.

For more information, or to book with Green Motion Manchester Piccadilly click here.