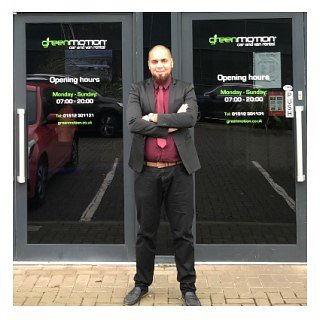 A former Green Motion employee, Yasin has worked with Green Motion since 2014. He has a wealth of valuable experience across a range of operational areas from customer services to fleet management, including acting as pricing manager at Manchester and Liverpool airport sites. This means he knows all about the car rental business from a range of perspectives and understands the importance of good customer service.

Yasin comments: “I’m very excited to own my first Green Motion site which has such great potential for growth. Having worked with the company for six years, I have a clear understanding of its environmental ethos and commitment to constantly improving customer service. To maintain and improve standards, I will ensure that staff are fully trained and that procedures are properly followed. I intend to focus on the Liverpool Airport branch for the next year, and then have plans to expand into other cities across the north such as Leeds.”

The John Lennon Airport branch currently has three members of staff, although Yasin has plans to employ an additional three or four people as the business grows. He also hopes to triple the current fleet of 25 vehicles to a total of 75 by the summer.

The John Lennon Airport branch was the first Green Motion site to open in the city, followed by the opening of a site at Lime Street station and then a downtown location in 2018. Liverpool was also the second city in the UK to accommodate more than one Green Motion branch. The airport site offers a customer transport service from the terminal to make vehicle collection quicker and easier.

The benefit of years of experience in the vehicle rental industry

Green Motion UK’s MD Sian Marston commented: “It’s great to see one of our former employees stepping up to owning his own branch. With the benefit of so much experience in the industry, I’m sure Yasin will make a great success of his new role. He also understands our green ethos and commitment to remaining the UK’s only carbon neutral car hire company. Our airport locations are very popular and so his plans for growth are both encouraging and achievable.”

Green Motion’s John Lennon Airport branch is open 8am till 8pm on Mondays, Fridays and Sundays, 8am till 6pm Tuesdays to Thursdays and 8am to 5pm on Saturdays. Click here, call 0151 230 1131 or email liverpool@greenmotion.co.uk for more information.