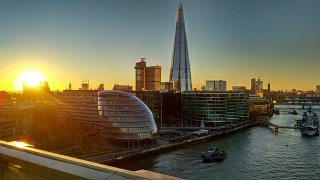 After its first month in place, the ULEZ in London is already proving to be a worthwhile addition in the fight against toxic vehicle emissions. Initial figures show that every day in April, an average of 9,400 fewer high polluting cars and vans entered central London than in March!

What is the ULEZ?

London’s ULEZ is the world’s first ultra-low emission zone that was launched last month on April 8th. The zone has been implemented to help address the capital’s toxic air health crisis.

Polluting vehicles are responsible for around half of London’s harmful emissions. And the harmful NOx air emissions cause thousands of premature deaths each year and chronic health problems for millions of people in the UK.

The zone operates 24/7 and if motorists drive into the central areas of London in a vehicle that doesn’t meet new emission standards, they will face a daily charge of £12.50. Larger vehicles including lorries, buses and coaches that do not meet the regulations face a £100 charge.

Improvement in the first month

Compared with when the plans were announced in February 2017, 36,000 fewer high polluting vehicles enter the central zone on average every day. Much of this is down to drivers switching to cleaner vehicles in the two year period.

Even more impressive is the finding that close to three-quarters of vehicles entering the zone in April complied with the new pollution limits, compared with 61% the month before.

These developments have already started translating into actual improvements in air quality, too. Research shows that there has been around a 20% reduction in NO2 concentrations measured at roadside monitoring sites since February 2017.

The ULEZ has been widely welcomed but many have called for further improvements. With London’s ULEZ already making progress in lowering pollution levels from traffic, what’s next for the UK in battling the problem?

Firstly, in October 2021 the ultra-low emission zone that has seen instant improvement will extend to the North Circular and South Circular roads, affecting more drivers.

We’re likely to see similar low emission zones launched in other major UK cities in the coming years, too. Glasgow, Manchester and Birmingham are the latest cities to propose clean air charges for vehicles that don’t meet low emission standards.

There’s also the 2040 petrol and diesel ban that will see all new cars in the UK effectively zero emission by 2040. This is part of the governments Clean Air Plan to tackle rising public health risks from air pollution.

With over 20 locations around the UK, you’re never too far from a Green Motion branch and we have car hire available in many of the most popular tourist destinations.

For more information about the range of vehicles available, browse our online booking platform.